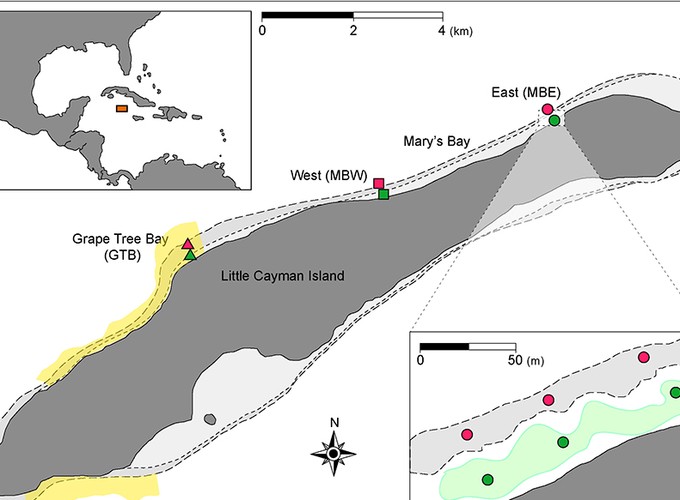 Coral communities are increasingly found to populate non-reef habitats prone to high environmental variability. Such sites include seagrass meadows, which are generally not considered optimal habitats for corals as a result of limited suitable substrate for settlement and substantial diel and seasonal fluctuations in physicochemical conditions relative to neighboring reefs. Interest in understanding the ability of corals to persist in non-reef habitats has grown, however little baseline data exists on community structure and recruitment of scleractinian corals in seagrass meadows. To determine how corals populate seagrass meadows, we surveyed the established and recruited coral community over 25 months within seagrass meadows at Little Cayman, Cayman Islands. Simultaneous surveys of established and recruited coral communities at neighboring back-reef sites were conducted for comparison. To fully understand the amount of environmental variability to which corals in each habitat were exposed, we conducted complementary surveys of physicochemical conditions in both seagrass meadows and back-reefs. Despite overall higher variability in physicochemical conditions, particularly pH, compared to the back-reef, 14 coral taxa were capable of inhabiting seagrass meadows, and multiple coral families were also found to recruit to these sites. However, coral cover and species diversity, richness, and evenness were lower at sites within seagrass meadows compared to back-reef sites. Although questions remain regarding the processes governing recruitment, these results provide evidence that seagrass beds can serve as functional habitats for corals despite high levels of environmental variability and suboptimal conditions compared to neighboring reefs.